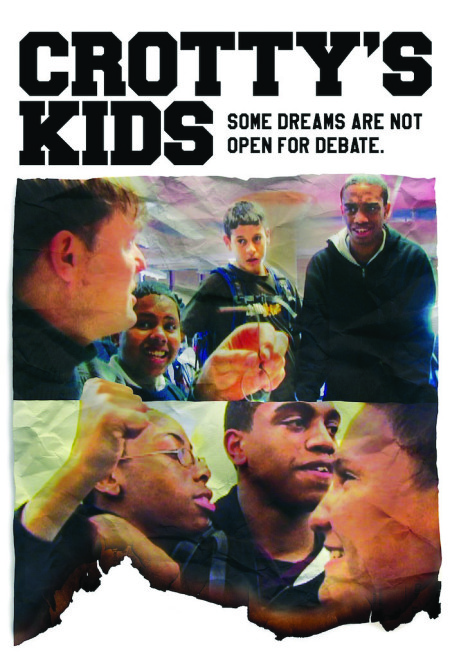 Includes the feature-length documentary, Crotty’s Kids — about the power of debate and mentorship to transform the lives of at-risk young men — plus humorous outtakes, closed captions, and a heart-warming Director’s Commentary on the making of this socially important film.

What Others Are Saying About ‘Crotty’s Kids’

Bursting with emotion and exquisitely inhabited by Crotty and the Bronx Boys cast.

In the South Bronx, over 50% of young men do not finish high school. One man did something about it.

Forbes education writer James Marshall Crotty made a feature documentary on the years he spent coaching debate in the New York Urban Debate League in the 2000s. Called ‘Crotty’s Kids’, it tells an affecting story of the ways that a teacher can reach at a deeper level — and have a more lasting impact on — his or her students through the coaching of competitive academic debate. The documentary has gotten favorable attention at film festivals around the country, including the prestigious 2014 South by Southwest Festival. I recommend it.
Les Lynn, Founding Director, Chicago Debate League

This compelling documentary explores the intricate and lesser-known world of competitive debate through the inspirational story of debate coach James Marshall Crotty and five determined students from Eagle Academy in the South Bronx. Crotty believes that “debate gets kids hooked on education and keeps them in school,” claiming that debate skills help students transcend the struggles and violence of their community. The film follows Crotty and the debaters on their journey to compete in the New York State Debate Championship event. The documentary weaves cinema verité–style footage with revealing personal interviews. With his stark honesty and contrasting humor, we see Crotty’s unorthodox and sometimes foulmouthed behavior, which, according to friends and family, hides the softer side of the teacher, who calls the students “my kids” and sees them as “intellectual athletes.” A concluding update of Crotty’s Kids eight years later is most inspiring.
Booklist

Filmmaker James Crotty – a columnist, journalist and former marketing consultant – was just a few years ago a fiercely determined debate coach who created [the debate and speech program at] the Eagle Academy for Young Men in the South Bronx. A white male, Crotty aimed to put a dent in the statistic linking a likelihood of incarceration with black males who don’t graduate from high school. Crotty’s Kids is a vibrant, touching documentary about that worthy goal playing out in the world of high school debate tournaments. Calling debate an “academic sport,” Crotty teaches the rigors of intellectual research and the techniques needed to be persuasive during arguments, while also engaging in endless bonding with his charges, as he becomes a tell-like-it-is father figure. A fine documentary about a man whose positive impact is seen here in his former students’ academic success, this is highly recommended.
Video Librarian Review

There are no upcoming events at this time.